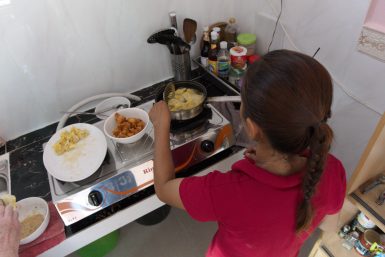 Archaeological evidence in the country suggests stone tools dating back as far as 6000–7000 BC and pottery from around 4200 BC.  Detailed research suggests that by the 1st-century settlers had developed complex, organised societies and varied religious cosmology requiring advanced languages even related to those of the present day.  Chinese records document the first known organised polity – the Funan Kingdom – which showed maritime trade and socio-political ties between India and South Asia.  By the beginning of the 7th century all of Cambodia was highly civilized.  At first, it was largely divided between rival states but at the beginning of the 9th century, a king named Jayavarman II founded the Khmer Empire.  Research has confirmed that, the capital of the time, Angkor maintained the largest pre-industrial settlement complex worldwide during the 12th and 13th centuries and the temple of Angkor Wat, one of the countries most famed tourist sites, was built over a period of 37 years. 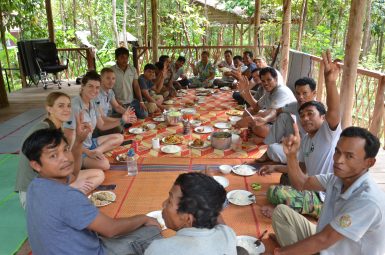 There was a number of civil wars and external invasions during the Khmer reign and by the 17th and 18th centuries, Thai and Vietnamese dominance had intensified, causing the frequent displacement of the seat of power of the Khmer royal authority.  By 1863, the King of the time agreed to place the country as a French protectorate.  The 20th century sees Cambodia passed between French and Japanese control, returning to the French after WWII only to gain independence in November 1953.  But the years that followed continued to be characterised by civil wars and in 1975, with the victory of the Khmer Rouge, a truly horrific era in the country’s history began.  The period saw the brutal annihilation of a great portion of the population in an attempt to restructure the country by moving all city dwellers to work on farms and removing the intellectual/middle class.  An excursion to the Choeung Ek Killing Fields and the Tuol Sleng Museum of Genocide on the outskirts of Phnom Phen may be sobering, but it is an important way to remember the past in the hope of ensuring it is never repeated.  An invasion on the part of Vietnam ended the Khmer Rouge rule and a peace agreement was signed in Paris giving a UN transitional authority temporary power-sharing with representatives of the various factions in Cambodia.  Today the country is a unitary state that is governed within the framework of a constitutional monarchy and criminal trials from the Khmer Rouge era still continue. 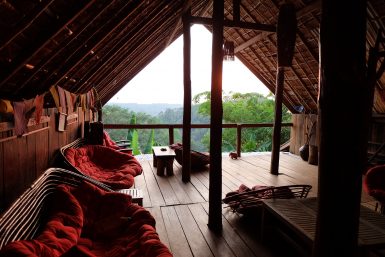 Over centuries of regional influences, the country has come to be characterised by culture and traditions that rest on a unique blend of religion and belief.  This sees a combination of indigenous Khmer animistic beliefs and the Indian religions of Buddhism and Hinduism.  Traditional greeting is done with a Sampeah, which involves pressing the palms together before the chest with a slight bow and greeting with a polite ‘Chumreap Suor’.  Did you know that, customarily, the higher the hands are held and the lower the bow, the more respect is conveyed?  Traditional dance in the country holds a similar air of grace and poise, and derives largely from a highly stylized art form that was once confined largely to the courts of the royal palace; known formally as Robam Apsara.  Another, faster tempo tradition in the country revolves around Khmer martial arts which dates back more than a thousand years, as evidenced by carvings in the Angkor temples. The martial arts include Bokator, Pradal Serey, Baok Chambab, Kbach Kun Dambong Vèng, amongst others.  While arts and handicrafts are intricate and wonderful in all their forms from silk weaving and silverwork to stone carving and copper work, Cambodian artists make particularly beautiful kites.  Kite-making and kite-flying tradition dates back many centuries and was revived in the early 1990s.  It is now extremely popular throughout the country.

Cambodian recipes are, traditionally, rarely written down but instead passed from mother to daughter through generations.  Rice, noodles, soups and tropical fruits are all commonly eaten along with a mix of spices like cloves, cinnamon, star anise, nutmeg, cardamom, ginger and turmeric.  Interestingly, in Khmer language, rice and food mean the same thing.  Although they are acquired tastes there are two other unique ingredients that give Cambodian cuisine its fabulous, typical flavour.  One is a pungent fermented fish paste known as pra-hok and the other, the kapi, a fermented prawn paste.  A few dishes worth trying are bai sach chrouk, or pork and rice (served early mornings on street corners); Fish amok;  Khmer red curry (particularly at special occasions); Khmer beef salad (featuring thinly sliced beef that is either quickly seared or “cooked” ceviche-style by marinating with lime juice); Nom banh chok (noodles typically beloved as a breakfast dish); Fried crab and Ang dtray-meuk, grilled squid (both specialities in the seaside towns) and the most adventurous, stir-fried red tree ants with beef and holy basil.  And for the sweet tooths, Cha houy teuk, a jelly dessert particularly favoured by children, which combines sago, bleached mung beans and coconut cream, cha houy teuk and is usually served in a bowl with a scoop of shaved ice.

Also remember, when sitting, keep your feet on the ground.  It is considered rude to point at anything with your feet!