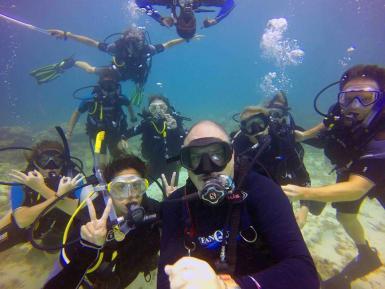 Like Grenada, Carriacou is thought to have been inhabited much prior to the arrival of Europeans in the late 17th century.  Arawaks and Caribs, descendants largely from the South American mainland, inhabited the island from 1000 AD.

Before Carriacou became an official part of the British Empire, alongside Grenada in 1763, it had already experienced French and English occupation. This resulted in the establishment of sugar, cotton and indigo plantations.  In addition to a number of estates being built and crops produced. Its culture was also created, fused from the variety of influence from Europeans, African slaves and mulattoes.

As a part of Grenada, it obtained its independence from the United Kingdom on Thursday 7 February 1974.

There are a number of ways to experience the cultural life the island has to offer. For example, you could be witness to a traditional wedding or boat-launching event, Or you might like to watch the Big Drum Nation Dance or Shakespeare Mas. Visitors can even take part in All Saint Candle Lighting ‘Pass Play’ and Fishermen Birthday Celebrations.

The annual Carriacou Regatta is held in the month of August. This event highlights the island’s boatbuilding tradition (passed down via a Scottish influence), hence the lively boat-launching ceremonies. Additionally, Tombstone Feast, known to the people as ‘Saraca’,  happens three years after death where people come together in commemoration.  The Big Drum Dance or Nation Dance of Carriacou, which rings through with African music, rhythm and dance, is widely celebrated. This is alongside other performances known as the Kalenda, Juba, Belair, Granbelair, Hallecud and Bongo. All of which are danced at weddings, boat launchings, tombstone feasts and Maroons.

The Quadrille Dance, which originates from France is the second most popular dance in Carriacou. During a Maroon, villagers come together and cook traditional foods and partake in the big ‘Big Drum Dance’.  The annual Maroon and String Band Music Festival is a three-day event of activities that showcase a display of local food, crafts, music and dance.