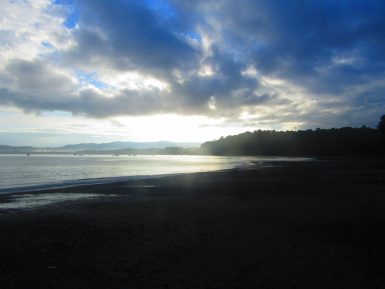 The Caribbean lowlands lie in the east and constitute about one-fifth of the country and the Pacific lowlands lie to the west and contain a number of small valleys and plains.  Valle Central, also called Meseta Central, is the highland valley in central Costa Rica and contains most of the country’s large cities and about seven-tenths of the total population. The valley itself is divided by low volcanic hills (the Continental Divide). 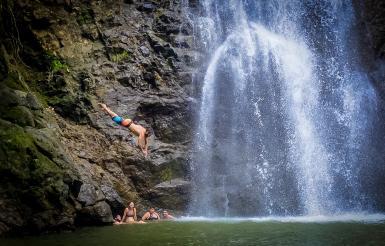 The country also boasts at least 60 volcanoes, five of which are active (Poas Volcano, Irazu Volcano, Arenal Volcano, Rincon de la Vieja Volcano and Turrialba Volcano). This volcanic abundance comes courtesy of two tectonic plates – the Cocos Plate and the Caribbean Plate – that sit beneath the country’s landmass. The shifting plates have caused many serious earthquakes over the years.  There are 14 major river systems that originate in Costa Rica’s mountains, each draining into the Caribbean Sea, the Pacific Ocean, the San Juan River or Lake Nicaragua. Two of these rivers, the Pacuare and Reventazon, produce world-famous whitewater rapids, while others, such as the Sixaola and San Juan Rivers, provide natural boundaries between Costa Rica and bordering nations. 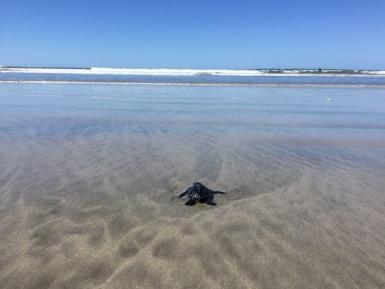 The country has both tropical and subtropical climates as well as a well-known array of microclimates.  Despite its reputation for being a tropical paradise, you can change the climate you experience in the country largely by changing your elevation, which in turn changes the amount of rainfall.  Highlands bring considerably more mist and fog throughout the year while along the Pacific coastline you can have the hot, dry days which make beach-going the perfect experience. The Caribbean coast has its own microclimate thanks to continual trade winds that keep the climate hot and moist, with rain year around.  For the most part, the year is split largely into the wet season, May to late November, and the dry season, December to April.  All of our volunteer in Costa Rica projects lie on the Pacific Coast in the west.  Starting from the northernmost point, the Olive Ridley sea turtle volunteer programme located in Ostional and the wildlife rescue volunteer programme in the Nicoya province experience similar weather.  Here temperatures are hot all year, with maximums sitting between the mid-to-low 30℃ and minimums rarely dropping below 20℃.  A lot of rain falls between May and November, with September being the wettest month, and the dry season is largely between January and March.  Located in a tropical rainforest further down the coast, our Playa Tortuga Conservation volunteer project with Sea Turtles, Caimans and Mammals, again has similar weather patterns.  The maximum temperatures however, sit more around the high 20℃s with the average lows in the high teens.  The humidity is also very high.  The last conservation volunteer project, focused on sea turtles is located in the Osa peninsula closest to the southern border of the country.  Here, maximum temperatures sit consistently in the low 30℃s and only drop to around the low 20℃s.  Rain falls largely between May and November, however it is usually from around 1-2pm or 6-7pm most days with the rest of the time being lovely and clear.