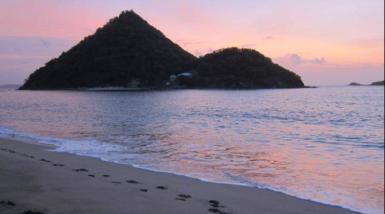 Located with the Caribbean Sea on its west and the Atlantic Ocean to its east, Grenada is a small island nation – which includes a number of island territories (like Carriacou, Petit Martinique and around 600 even smaller, uninhabited islets).  It is the southernmost collection of the Windward Islands and is about 160 km north of the coast of Venezuela.  The country’s tiny land mass is volcanic in origin and largely mountainous with dense forest, the highest point of which is Mount St. Catherine at 840 m (its islands are slightly less rugged and forested).  There are also a number of rivers that cut deeply into its slopes, and the narrow coastline in the south rises to dormant volcanic ridges, valleys, waterfalls and even a few boiling springs in the north.  A few of the mountains contain crater basins, and one includes a large crater lake named Grand Etang, the lake is surrounded with some of the island’s most beautiful rainforest. 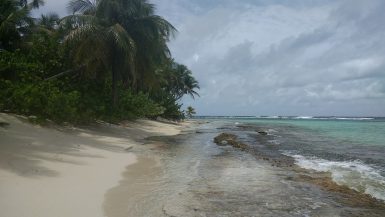 On average the temperatures are always high across the country and the abundance of water is a consequence of considerable precipitation.  In fact, rainfall occurs across January, May, June, July, August, September, October, November and December, with perhaps the wettest month being November and high humidity also characterising the months. Temperatures averaging 29°C are pretty constant for midday across the year, however, there are slightly higher readings in the lowlands.  At night these temperatures drop to a range of between 19°C and 24°C.  Of the two projects offered, one is located in the northeastern part of the main island, Grenada, and the other is on the largest of the territories, Carriacou.  The climatic experience described above is consistent across these areas.