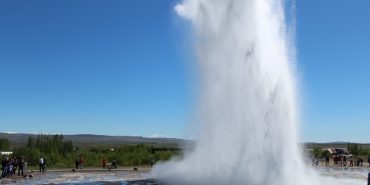 Iceland is an island nation that is also one of the most sparsely populated countries in the world.  It is located about 850 km of the coast of Scotland and is encircled by the North Atlantic Ocean, the Greenland Sea and the Norwegian Sea.  It is also directly south of the Arctic circle.  Its unique geological position gives it an interesting array of contrasts: with glaciers spread across rugged mountains, hot geysers in abundance across the landscape as well as lakes and waterfalls and a mild climate, produced by the presence of the Gulf Stream, despite its far northerly position.  Interestingly, Iceland is one of only two places in the world where you can see the earth’s tectonic plates meeting above the earth’s surface (at Þingvellir, anglicised as Thingvellir).  About one-tenth of the island is covered by glaciers (and cooled lava) – the largest of which is Vatnajökull which is equal to the combined total area covered by all the glaciers on the continent of Europe.  One of our volunteer projects is located here, and it gives you the opportunity to see this beautiful landscape in all its glory first hand.  A large part of the country is arctic desert and much of the vegetation and agricultural areas are found in the lowlands closer to the southern coast.  Volcanoes are also a large part of the landscape and 200 various types can be found across the country.  The highest point is a peak on the edge of a volcano (Öræfajökull Volcano) called Hvannadalshnukur, which rises 2 110 m.  There have been multiple small eruptions across the 20th century and even into the early 21st century. Eyjafjallajökull volcano, for example, erupted in March 2010 and caused ash and smoke that disrupted air traffic right across northern and central Europe. 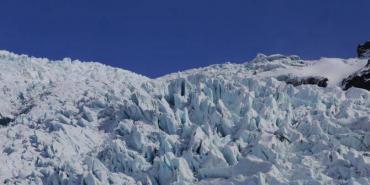 Traditionally the country can be divided into a number of parts.  The central regions are uninhabited; the south-west have some important harbours and good fishing grounds off the coast (though little farmland inland due to extensive lava fields); the middle west region has both fishing and farming; the north has a number of districts with fertile farmlands, the east (like the west) has fishing grounds but also fertile inner lowlands; the south-east is largely rugged terrain and the southern lowland is home to the main farming region (with both favourable soil, terrain and weather). 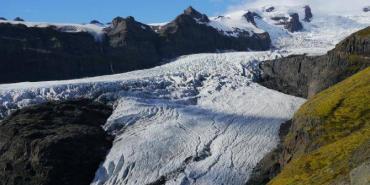 The climate is a maritime subarctic climate largely influenced by the convergence of two contrasting air currents, one of polar and the other of tropical origin.  Two ocean currents also play into the mix: the Gulf Stream and the East Greenland current.  The weather is infamously variable and subject to change across the regions although the temperature is often similar and the seasons are divided largely into Summer (May to early September) and Winter (September – April).  As mentioned, this winter is considerably milder than might be expected for a country so far north, temperatures range from 0℃ in the lowlands to a frosty -10℃ in the highlands.  Winter also gives you the opportunity to see the magnificent Northern Lights (one of Iceland’s biggest tourist draws), although unpredictable and very dependent on a number of conditions it is best to see them away from city lights.  In the north, the lowest temperatures drop to around -25℃- -30℃.  In contrast, in summer, southern parts experience an average of between 10-13℃, although the warmer summer days can see temperatures reach as high as 25℃.  Thunderstorms are extremely rare in the country but dust storms do occur generated by strong glacial winds, particularly evident in summertime.  More rainfall occurs in the southern and western parts than in the north and this also mostly happens in summer.  The project is located in the south-eastern part of the island and thus experiences relatively warm conditions, precipitation in the area is usually rain rather than snow and the sun sets early in winter (around 16h00) but late in summer (around 23h00).  Joining in summer also gives the opportunity to experience everlasting days (sometimes it is still light at 3am!) as well as the festivities that come with Midsummer celebrations.