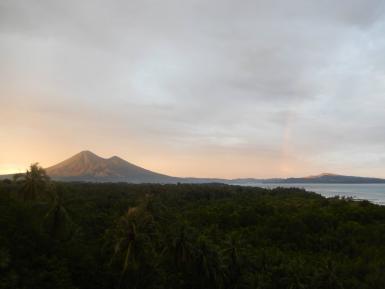 Indonesia is a collection of close to 18000 islands (though some more recent records reduce that to around 14000 by not including certain tidal islands and sandy cays).  Either way it is the largest archipelago in the world, located between the Indian and Pacific Ocean, and, because of its range, is also transcontinental – with some islands included in Asia and others in Australia.  Most of the islands’ geographies are characterised by coastal lowlands and lush, tropical vegetation.  Though on the larger islands, Sumatra and Java for example, you find towering inland mountains with the highest point being Puncak Jaya at 5,030 m.  The nation is also characterised by a large amount of volcanoes, many still active, and includes Mount Tambora which is an active stratovolcano whose 1815 eruption was the largest ever in recorded history.  The nation is, in fact, included in a group of volcanoes called ‘The Ring of Fire’.  The islands are located amidst numerous tectonic plates, including two continental plates: the Eurasian Plate (Sunda Shelf) and the Australian Plate (Sahul Shelf) as well as two oceanic plates: the Philippine Sea Plate and Pacific Plate.  This means natural disasters, like earthquakes, are more common in the region than in other parts of the world.  The project offered is located on the northern part of Island Sulawesi, which is one of the four Greater Sunda Islands situated east of Borneo, west of the Maluku Islands, and south of Mindanao and the Sulu Archipelago.  It is the world’s eleventh-largest island and is surrounded by deep seas that rise in the interior to mostly non-volcanic mountains.  Though the northern peninsula does contain several active volcanoes such as Mount Lokon, Mount Awu, Soputan and Karangetang. 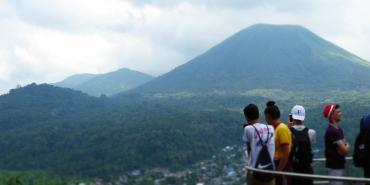 The country’s climate is tropical with hot and humid conditions in the lowlands and an increasingly moderate climate as you move to higher elevations.  On average temperatures sit around 28°C in the coastal plains, 26°C in the inland and mountain areas, and 23°C in the higher mountain regions.  Like temperatures, humidity is also pretty consistent, ranging between 70% and 90%.  Rain is what really dictates the annual weather experience and generally speaking, there is a dry season from June to September, and a rainy season from December to March.  A number of islands, including Sulawesi, are the most predictably damp regions.  In Northern Sulawesi, maximum temperatures remain in the high 20°Cs throughout the year and between July and December they usually climb to between 30°C and 35°C.  Minimums consistently sit in the early 20°Cs.  Rain is quite prominent throughout the year, although December to February sees the most rain and September sees the least.  Humidity sits around 80%.