Laos is a small, landlocked nation in south-east Asia, sandwiched between two long borders with Vietnam to its east and Thailand to its west.  The country also shares a narrow border with Myanmar and China in the north and Cambodia in the south.  The western border is largely composed of the Mekong river while the eastern border with Vietnam lies, in most part, along a great mountain range known as the Annamite Chain.  The latter has been, and continues to be, a considerable barrier between the two regions and has had an influence on the differences in culture on either side.  Much of Laos is actually composed of mountainous terrain, with steep landscapes dropping into narrow valleys.  There is little agricultural land in the north, although a number of plains and a southern panhandle allow for a small amount of rice-paddy cultivation. 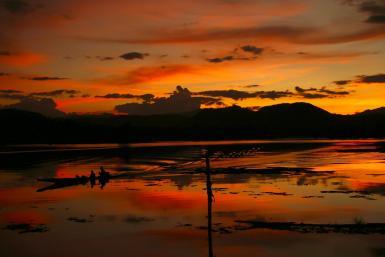 Like its neighbours, the country has a tropical monsoon climate and the climatic conditions experienced are largely classified into the experiences in the north and the experiences in the central and southern regions.  The monsoons govern the seasons, with the winter monsoon bringing good weather and cool nights between November and February, and the summer monsoon, bringing rainfall and high humidity from May to October.  Prior to these summer rains, the hottest period (around March to May) brings temperatures that reach into the mid-40°Cs.  Winter months, however, also see temperatures that mostly sit in the 30°Cs.

Luang Prabang, where the project is located, is a province found in the north of the country.  Winter temperatures, which occur largely between November and February, reach average highs of between 27°C and 29°C and average lows of between 14°C and 18°C.  The summer temperatures sit in the early 30°Cs and drop to the mid-20°Cs in the evening.  It is one of the regions with least amount of rain, and much of this occurs between May and October.