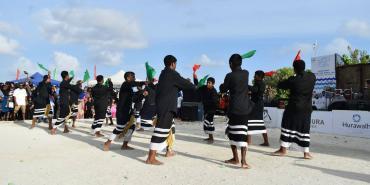 The Maldives has been inhabited since around the 5th century BC by people coming across from, what is today, Sri Lanka and India.  Evidence suggests early inhabitants were Buddhist but by 1153 CE, Islam was adopted across the islands when Arab interest in the region became prominent.  Today the country is largely Islamic in religion and you can see a number of mosques scattered across Malé.  In addition, the Islamic centre and Sultan’s park are attractions whose beautiful architecture is particularly striking.  Did you know the Maldives also had an abundant supply of cowrie shells which was a form of currency that was widely used throughout Asia and parts of the East African coast since in ancient times?  Historically, the country also had strategic importance because of its location on the major marine routes of the Indian Ocean.  Malé was dominated by the Portuguese from around 1558 until they were expelled 20 years later.   In the 17th century the islands were a sultanate under the protection of the Dutch rulers of Ceylon (Sri Lanka), and, after the British took possession of Ceylon in 1796, the islands became a British protectorate, a status formalized in 1887.  On 26 July 1965, the Maldives gained independence under an agreement signed with United Kingdom and today, the country remains a presidential democracy.  Yet, it has in recent history caused concern by scoring poorly on indices of freedom in relation to civil liberties.

The islands derive influence from a number of sources when it comes to culture and tradition.  However, due to their proximity, Sri Lanka and South India have a particularly strong influence.  Some influences also derive from African slave ancestry, due to those brought across from the continent to serve people of royalty at various times.  In music and dance, for example, you can recognise a purely African rhythm which the Boduberu, a traditional Maldivian dance, illustrates perfectly. The language accompanying this dance, followed by the rhythm of the drums, is also reminiscent of East Africa. 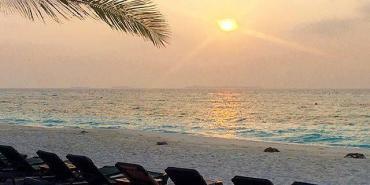 Staple foods are rice and fish, with seafood playing an incredibly important part in most people’s lives.  The inhabitants of the Maldives consume a lot of spices, including curry, showing much of the Indian influence.  Coconut milk, as well as fish, find their place in the traditional dishes of the country like Roshi.  Betel leaf with areca nut, cloves, and lime, known as foh, is chewed after meals and older people smoke guduguda (an elongated pipe that goes through a trough of water).  In terms of drinks, while alcohol is not permitted (aside from inside resorts), a local brew called raa is consumed instead.

Legends and folklore are especially mythical and based on the oral tradition found across the islands.  Passed down from generation to generation the island’s folktales, because of the proximity to the ocean, often depict fearful sea demons and spirits that haunt the Islanders.  This creativity also flows into craftsmanship where the mastery and inventiveness of Maldivians can be seen in lacquer works, mat weaving, coir rope making and calligraphy.  In addition beautiful local crafts include braided mats and various jewellery.  The perfect mementoes to carry home with you.