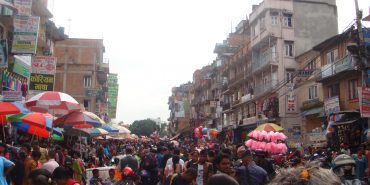 Evidence suggests that habitation of the region that is today Nepal began as early as 9th century BC.  These inhabitants are thought to have had Bhutanese-Mongoloid parentage and, although not much is known about early periods, the country’s history has been traced through regional accounts.  For example, it is mentioned in the Hindu epic of Ramayana as it is said that Janakpur, in the Tarai region, was the birthplace of Sita, the wife of Rama.  For many centuries the country was made up of many small kingdoms and, around 500 B.C, the most powerful among them were the Shakyas of Kapilvastu.  In the Medieval Period, the locals remained largely undisturbed and the climate and terrain served to protect groups from regional dynamics.  In the 14th century a ruler, King Jaisthitimalla, tried to unite the country under one rule, but it was a short-lived union and it was quickly divided into three kingdoms: Kathmandu, Patan and Bhadgaon.  The peace that largely characterised the nation however was undone from the 18th century as warring dynasties, massacres and conflict with external parties became more commonplace.  It was a period that began with a forceful unification under the Shah dynasty.  The Anglo-Nepalese war of 1816 was lost to the British East India Company and the Kot massacre, of 1846, started the century-long conflict between two dynasties: the Shahs and the Ranas.  In the 20th century, Nepal supplied both military and equipment to the Allied war effort while dissatisfaction with the Rana rule led to the Revolution of 1951.  However, right up until 1990, the King held all the real power in the country.  The reign of various dynasties has left behind some impressive palaces which are famous for their distinct architecture and decoration works. 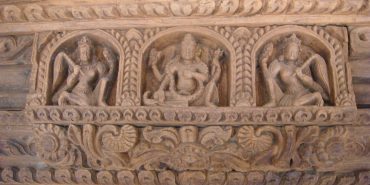 The country is an interesting mesh of cultures and traditions that vary between the different regions.  For the most part, religion plays a considerable role in people’s daily lives and customs, evidenced by great quantities of temples, churches, monasteries and other religious buildings.  In fact, Pashupatinath is noted as being the most famous temple in the world; engulfing visitors with a mystic touch.  Hinduism and Buddhism are the major religions (with Buddha worshipped widely by both) and there also exists a diverse array of Islam, Christianity, Jainism, Sikhism, Bon, ancestor worship and animism.  Some beautiful Buddhist sites to visit such as stupas (mound-like or hemispherical structures containing relics that is used as a place of meditation) include Boudhnath Stupa, Machendranath Stupa and Swambhunath in Kathmandu and you can find various smaller Stupas and monasteries in Lumbini, The birthplace of Gautam Buddha.  Informed by religion, a number of customs that may be useful to remember are: Nepalis don’t eat beef because of the sacredness of the cow (which is in fact their national animal) and they consider cow dung to have cleansing properties; people consider food or other material that is touched by another person’s mouth directly or indirectly, called ‘Jutho’, impure and Nepalis live largely by the caste system. 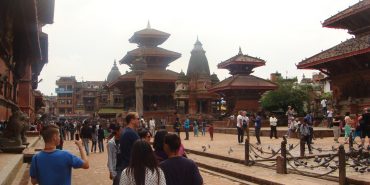 A number of well-known festivals, stemming from religious origins, add colour to the cultural landscape.  In fact, in February/March, you can experience one of the world’s most well known Festivals of Colour: the Hindu festival, Holi – also known as the Festival of Love.  In April, with a golden chariot as its centrepiece, is the Nepali New Year: Bisket Jatra.  In September, there is the Indra Jatra festival (literally, the procession of the Lord of the Rain), which combines homage to Indra, the Hindu god of rain and thunderstorms, who wields a lightning rod and rides a white elephant called Airavata, with the annual appearance of Kathmandu’s living goddess.  Did you know Kathmandu’s living goddess is a young girl chosen from the Kathmandu valley, who lives in the Kumari Bahal temple on Durbar Square? The selection process is rigorous: the child, aged between 2 and 4 years old, can never have had an injury that has drawn blood, and must pass the ’32 perfections test’ (which assesses things such as the child’s horoscope, eye colour and teeth shape).  Other festivals worth looking into are Dashain in October, Diwali in October/November and Mani Rimdu in November.

You can find small elements of urban glitz characteristic of an ultra modern world however much of the country is still agrarian based and the livelihood patterns are inseparable from the environment.  Our Volunteer in Nepal – Traditional Farming project embraces this and is a cultural and environmental placement for people who want to experience the lifestyle of rural Nepal, where the majority of people still farm using traditional methods.  The other volunteer in Nepal projects are aimed at healthcare and medical volunteering and are dedicated to community development.  The food in the country is not especially unique but much of the diet is characteristic of a rural base.  Thus, the regular Nepali meal is dal (lentil soup), bhat (boiled rice) and tarkari (curried vegetables), often accompanied by achar (pickle).  Curried meat is consumed for special events and momos (steamed or fried dumplings), rotis (flat bread) and dhedo (boiled flour) make their appearances on occasion.  There’s no place like Nepal to really get ‘stuck into’ your food as most people eat with their hands rather than cutlery (their right hands to be specific).  Another use for your hands is in greeting as most Nepalese greet one another by a ‘Namaste’, a common act done by putting the palms together in a prayer-like gesture.