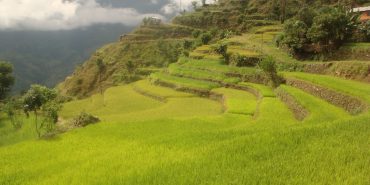 A sliver of a country in Asia, Nepal is landlocked and surrounded by China to its north and India to its south, east and west.  Though on its eastern border it is not far separated from Bhutan and Bangladesh.  Yet its small size does not limit the terrain’s diversity.  The country is largely split into three regions: the lowlands which run along the southern border (the Tarai region) with tropical savannahs, some small hills and the country’s agricultural hubs; the central region which rises to small mountains (the Pahad region) with subtropical broadleaf and coniferous forests covering the hills and montane grasslands and shrublands the more you move up, though no real snow coverage; and lastly, and probably the most well-known, the Himal mountain region in the north, which includes, of course, Mt. Everest (locally known as Sagarmatha), the world’s highest mountain at 8,850m.  The region also includes the Kali Gandaki Gorge, which, by some measures, is considered the deepest gorge in the world.  Between all the mountains across the regions are a diverse collection of valleys which make for magnificent scenery and even more fascinating ecological areas. 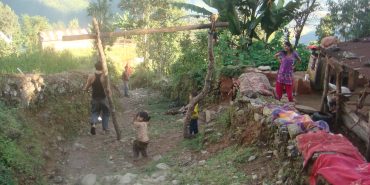 Like many of its Asian neighbours, the country’s seasons are divided according to rain.  Thus the year is divided into a wet season from June to September, when summer warmth in the region draws in moist air from the Indian Ocean, and a dry season from October to June as cold temperatures in the vast interior cause dry air to flow outward.  April and May are particularly dry, exacerbated by temperatures reaching up to 40℃.  Much of Nepal’s native vegetation in the lower regions is thus adapted to resist drought pressure and so you find much drought-tolerant scrub forest.  Sustained rain on average arrives in mid-June, but this can vary up to a month, and it diminishes by September/October.  Post monsoon season, with cool, clear, and dry weather, usually lasts till December and is followed by the winter monsoon which brings short rainfalls in the lowlands and plains and snow in the high altitudes.  The warm, dry season brings average temperatures of 28℃ in the hilly regions and 40℃ in the lowlands, while in the cold winter months, the temperatures in the lowlands range between 7℃ and 23℃ while the hilly regions sit at a colder average maximum of 12℃ and drop below freezing at night.  In the high mountains, the temperatures are considerably colder.