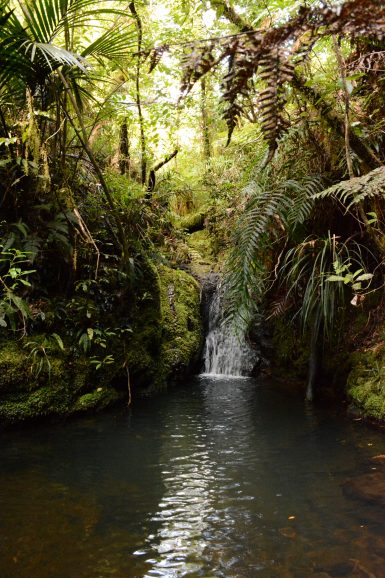 New Zealand is off the southeast coast of Australia and is comprised of two large main islands (the North Island and the South Island).  In addition to this it has Stewart Island, hundreds of coastal islands and many regional islands.  The snow-tipped, southern Alps extend almost the width of the western part of the South Island and here you find the highest point, Mount Cook (Aoraki), at 3 754m.  There are also over 350 glaciers and an array of beautiful national parks.  Along the east of the South Island, the mountains slope into a region of rolling hills and plains, scattered with icy rivers.  In the far southern part of this island you also find some dramatic sheer rock faces that rise 1 200 meters and a jagged coastline of fjords, inlets and bays onto the Tasman Sea.  Across the western coast of the South Island are temperate rainforests.  These are also found across the North Island where the mountains are largely volcanic in origin and stretch across a wide, central plateau.  The area is also home to boiling mud pools, geysers, hot springs and steam vents and encircled by a broad stretching coastline.

New Zealand has a largely temperate climate with a sub-tropical climate in the far north and an alpine climate inland of the South Island.  Summer is from December to February and Winter from June to August, with spring and autumn in between.

Most of the country lies close to the coast, which means mild temperatures, moderate rainfall (which is largely consistent throughout the year), and abundant sunshine is prominent.  Though as you travel south the temperatures tend to decrease.   In summer, the average maximum temperature ranges between 20 – 30℃ and in winter, between 10 – 15℃.  Winter also sees snow in the southern mountainous areas.  The projects are offered in four locations: in Auckland summer maximum temperatures sit around 24℃ with average lows of 12℃ while winter drops to highs of 15℃ and lows of 9℃.  Rain falls fairly consistently throughout the seasons, with slightly more in winter.  Along the Kauri Coast, in the north, maximum summer temperatures sit around 22℃-23℃ and drop to around 15℃ while winter temperatures climb to between 14℃ and 16℃ and drop to around 7℃ to 10℃.  In Wellington, summer sees highs of 20℃ and lows of 13℃ with winter dropping temperatures to highs of 12℃ and lows of 6℃.  Again rain occurs slightly more often in winter.  And lastly, in Christchurch, highs of 22℃ and lows of 12℃ occur in summer, and highs of 12℃ and lows of 3℃ in winter.  Rain is consistent annually, averaging around 7 days out of each season.