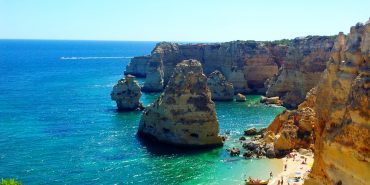 Portugal is found on the western side of the Iberian Peninsula, bordered by Spain in the east and with an Atlantic coastline stretching around from north to south on its western side.  Interestingly, there is still territorial dispute between Portugal and Spain as to exactly where parts of the border lies.  This is despite being one of the oldest borders in the world (defined in 1297 by the Treaty of Alcañices).

The country also includes as territories the Azores and Madeira islands, located off the south-west coast.  Including these islands the country boasts and impressive 1800 km of coastline.  In the southern Algarve region, this is most famously expressed in beautiful limestone caves and grottoes.  The northern and central coastline also has spectacular cliff faces dropping into white sandy beaches.  The northern parts are characterised, inland, by mountainous and hilly areas, as well as fertile land, while the south stretches into drier plains, with rolling hills and a broad coastal plain.  The highest point on the mainland is Serra da Estrela, at 1,991m, in the central region. 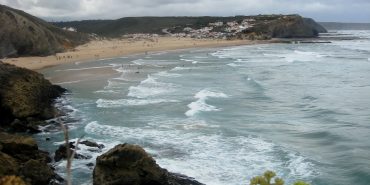 The climate in the northern parts of the country is typically cooler and wetter than its southern counterpart, although all-round, temperatures are largely mild.  However, weather can also differ between regions.  Winter generally starts in late November and lasts till February.  Rain occurs across this season, though more so in the north, contributing to its fertile land.  March, April and October are transition months, with mild weather, and the long summer period is from May to September.

By in large the climate can be divided into that experienced in the north, that of Lisbon and the ‘silver coast’ and that of the Algarve coast.  The north is cooler and experiences warm, though not sweltering summers.  It is possible to experience some snowfall in the country; however it is rare and mostly occurs in the Serra da Estrela Mountains.  The south coast is much drier, warmer and sunnier.  It also experiences a much more Mediterranean climate despite not technically having any geographic connection to the Mediterranean sea itself.  Here in the southern coast regions, it is usual, in the middle of summer, to experience highs of 27℃ and 12 hours of sunshine each day, with winter dropping to highs of around 15℃.  Albufeira, where the project is located, can be found in this sunny Algarve region and gives volunteers the ease of a stable climate.  Water temperatures in the area peak at 20℃-22℃ in summer and drop to a low of 13℃ in winter.