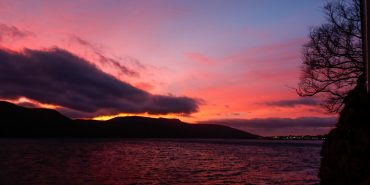 Located in Northern Europe, Scotland makes up around one-third of the island of Great Britain and also has just under 800 island territories located off its northern and western coasts.  It has the Atlantic Ocean to the north and west, the North Sea to the east and England on its southern border.  Once covered by glaciers of the Pleistocene Ice Age, the country is now largely a mixed of rugged mountains, deep lakes, icy rivers and lowlands in the form of wide valleys.  The country also has some impressive, sprawling cities contrasting with isolated islands.  The northern regions (Northern Highlands) of the country are the most mountainous, with spectacular scenery rated often as the best in the whole of the U.K.  The granite Grampian mountains are slightly more south and are notably more grassy than their northern counterparts.  Here you find the highest point in Scotland – and the U.K – Ben Nevis at 1 344 m and the largest lake, Loch Ness.  The central regions comprise of the populated and industrialised lowlands which slope slightly as you move south, creating the hilly Southern Uplands that border England.  This area is well known for agriculture.  The many islands are largely hilly, rugged and sparsely populated: the major groups include the Inner and Outer Hebrides, Orkney and Shetland. 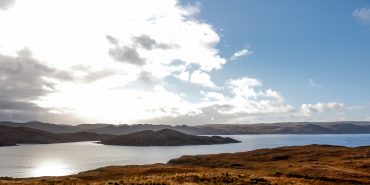 Scotland, warmed by the North Atlantic Drift, has a temperate oceanic climate, and can be warmer than is probably expected given its northern latitude.  However, despite its small size, there is considerable variability in the weather.  It does bear similarity to the UK seasons though is likely to be colder, windier and cloudier.  The Northern Highlands, especially at peaks, can experience heavy snowfall and blizzards, while southern parts display much drier conditions yet at other times, the highlands can be sunny while mist and cloud covers the south.  Spring/summer is between April and August with autumn/winter from September to February/March.  Rainfall occurs more in winter.  The west tends to be milder in winter (with less frost and less snow in low areas) but wetter and cloudier in the summertime.  The western coast is where the project is located – though much takes place onboard a boat.  Winter maximum temperatures average between 5°C to 6°C, with summer maximum temperatures averaging 15°C to 18°C.  Lows drop to just above 0°C in mid-winter and 11°C in midsummer.