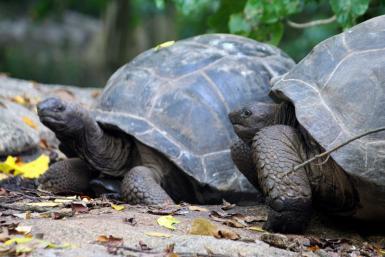 Seychelles is home to a diversity of flora, fauna and small wildlife.  Reports suggest that around 7200 species of animal, plant and fungi have been recorded.  These include the famous giant tortoises and coco-de-mer palm.  Did you know, Bird Island, the northernmost island in the archipelago, is home to the heaviest land tortoise living in the wild, Esmeralda, who tips the scales at 670 pounds.  Endemism, meaning being restricted to a specific place, is quite high on the islands with of 60% of animals being endemic and around 50% of plants.  Seychelles has 250 bird species, 12 of which are endemic, including some rare breeds, like the bare-legged Scops owl, which is so rare that it was once thought to have become extinct before being rediscovered in 1959.  Other important bird species include the Seychelles magpie robin and the Seychelles warbler, both of which have been rescued from the brink of extinction.  The national bird is the rare black parrot and the islands were also formerly home to the Seychelles parakeet, which unfortunately became extinct in the late 1800s. 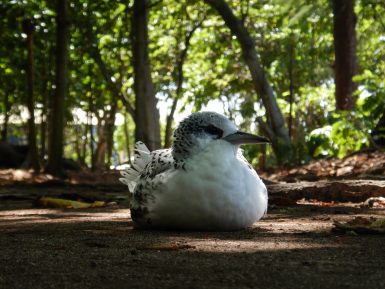 Given the remoteness and lack of population on many of the islands, the nation is also host to some incredible marine life.  More than 1000 species of fish have been recorded and the array of coral reef islands provide important habitat to colourful sea populations.  There are also a number of beautiful seabirds like the sooty tern, fairy tern, white-tailed tropicbird, noddies and frigatebirds.  Aride Island, a northern granite island, has more species of seabird and greater numbers than the other 40 granite islands combined.  Terrestrial and semi-terrestrial crabs, including the largest land invertebrates, the coconut crab, as well as turtles also find space amongst these impressive populations.  Snorkelling and diving are very popular activities and, since the banning of speargun and dynamite fishing in the 1960s, the wildlife is largely unafraid of people.  Coral bleaching in 1998 has unfortunately damaged most reefs, but some show healthy recovery.

Research and conservation are critical parts of efforts to restore and maintain the wildlife in Seychelles.  Like other Indian Ocean islands caught up in the explorations of a number of nations, Seychelles has been victim to human action.  This includes the felling of coastal and mid-level forests and hunting, causing the disappearance of a number of species.  These include most of the giant tortoises, the Marianne white-eye, the Seychelles parakeet, the Seychelles black terrapin and the saltwater crocodile.  Although, due to shorter and less contact during history with sailors and settlers, the extinctions and damage has not been as severe as other islands like Mauritius or Madagascar.  In fact, Seychelles is also known as a success story in the conservation of its native flora and fauna. 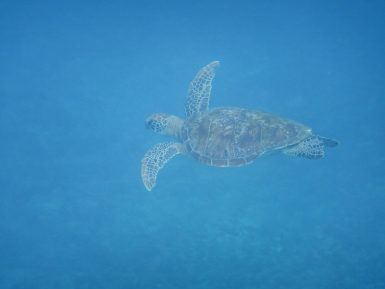 Cousin Island, is a key part of this success story.  As mentioned, it is a granite island located just west of Praslin and once over-exploited by man as a coconut plantation, the island is now a safe-haven for an impressive variety of plant and animal species.  It is an island, now dedicated to the preservation of the biodiversity and was initially purchased by the International Council for Bird Protection (now BirdLife) in 1968, for the immediate purpose of saving the endemic Seychelles Warbler.  The vegetation has been allowed to recover and regrow naturally, although on the plateau many coconut trees have been removed to make way for native woodland.  The island is also one of the most important nesting sites in the West-Indian ocean for the colourful Hawksbill sea turtles.  It’s also among one of the most endangered sea turtle species, and through our Seychelles Island Conservation Volunteer Programme, volunteers are given the opportunity to work closely with these incredible creatures.  Volunteering continues to be of crucial importance to the efforts in the country; the project offered really gives volunteers in the Seychelles the opportunity to get stuck in to making a difference with activities like working with, monitoring and researching turtle species and sea and land bird populations.