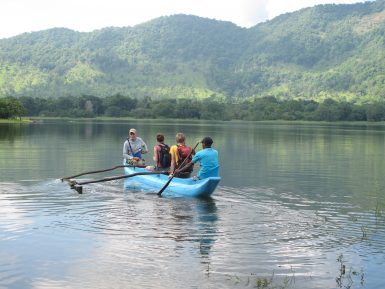 An island nation located in the Indian Ocean, Sri Lanka (or officially the Democratic Socialist Republic of Sri Lanka) is the largest island off the coast of the Indian mainland (and the 25th largest island in the world).  It has a number of small islands offshore – the largest of which, Mannar Island, leads to Adam’s bridge, a collection of limestone shoals, which is in turn connected to the mainland.  The formation is also known as Rama’s Bridge, as according to Hindu mythology, it was constructed during the rule of Lord Rama.  At one point it was completely passable but has been damaged since the 15th century due to a considerable cyclone.  The island is a collection of seemingly endless sandy beaches, whose coastal regions slopes gently to flat plains which, towards the central southern region, rise into the foothills of a mountainous area.  These mountains are scattered with deep valleys and impressive gorges and around 40% remains forested.  Along with forest, this region also includes, Pidurutalagala, the country’s highest point at 2518 m and Adam’s Peak, the country’s famous religious site.

The climate is hot and tropical with high, average temperatures.  The country’s seasons, like many others in the region, are dictated largely by the monsoons: The northeast monsoon (December to March), and the southwest monsoon (June to October).   The average yearly temperature for the country as a whole ranges from 28°C to 30°C, although in the central highlands the temperatures can drop considerably below this, sitting at lows of 16°C during the colder months and even nighttime temperatures of 5°C in January (the coldest month).  Heavy rainfall occurs in the southwest and mountainous areas and, here, humidity is also typically higher.

Our Volunteer with Elephants in Sri Lanka project takes place in the central region of the island in a large national park characterised by stretching grasslands and spots of evergreen forest.  The National Park’s annual daily temperature is 28°C and has a dry zone climate.  Most rain is received during the north-eastern monsoon, from around October to January, with July to September bringing the dry season.