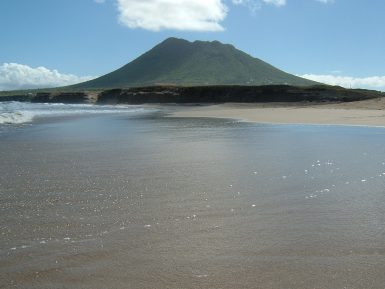 This saddle-shaped island lies in the northern Leeward Islands portion of the West Indies, southeast of the Virgin Islands, northwest of Saint Kitts, and to the southeast of Saba.  On the mainland there is the high dormant volcano, Quill, in the southeast and the smaller, rugged Signal Hill/Little Mountain and Boven Mountain to the northwest.  It is between these two points that most of the population lives.  Lush rainforest covers the base of the mountainous points and scattered streams make their appearance, though there are no permanent lakes or rivers.

The climate of the nation is hot, though tempered by cool trade winds.  The temperatures vary little throughout the year, remaining around the average of 27℃.  This means maximum temperatures range from 28℃ to 32℃ while minimums sit between 22℃ and 25℃.  The cooler of both being experienced between December and April.  There is quite consistent rainfall throughout the year, though the driest months are usually February, March, April and June with the most humidity in August and September.