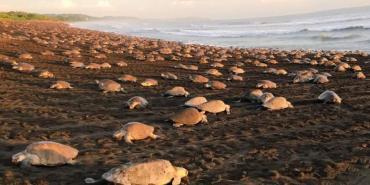 This project is located at Ostional beach, within the Ostional National Wildlife Refuge (ONWR) in the Guanacaste Province. It is an important nesting beach for three of the world’s seven species of sea turtles, and has been active in sea turtle conservation for the past 40 years.

The project directly works with the Olive Ridley turtles nesting in Ostional, and our volunteers will often be lucky enough to witness first hand the rarely-seen biological spectacle of the arribadas – one of nature’s true wonders. Thousands of Olive Ridley sea turtles leave the sea simultaneously, bumping into and crawling over each other as they ascend the beach in their endeavour to lay their eggs. At first a few hundred turtles arrive, followed by a steady stream of females for the next three to seven days (usually during the last quarter of the moon before New Moon). The Olive Ridley sea turtles (and its Atlantic cousin, Kemp’s Ridley turtle) are the only species to stage arribadas which are known to occur at only nine beaches worldwide: in Mexico, Nicaragua, Honduras, Surinam, Orissa in India and Costa Rica. Of these locations, Ostional beach is considered the second most important.  BBC 4 featured this project in its Nature’s Turtle Nursery: Secrets from the Nest documentary. 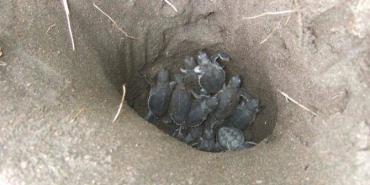 Understanding the population fluctuations is crucial to design effective conservation and management strategies for a successful sea turtle conservation programme.

As an Olive Ridley sea turtle volunteer, you will assist with: 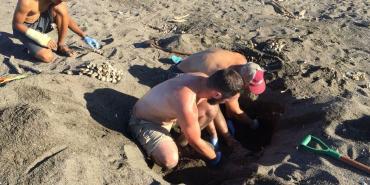 Nightly patrols are run in two five hour shifts; from 8pm to midnight and midnight to 4am. Volunteers are led by an experienced patrol leader and walk a sector of the beach searching for nesting females. Once a turtle is encountered, volunteers will carefully assist in the collection of data such as; carapace length and width, nest location and dimensions (depth and width) and the number of eggs in the clutch. The eggs will be collected for relocation and the turtle checked for identification tags. If a turtle is found without tags they will be applied and a small tissue sample taken from the rear flipper for DNA analysis. Tagging and tissue samples will be performed by the patrol leader. 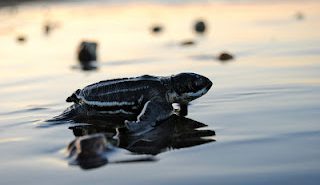 Ostional is also home to a small number of leatherback and pacific green turtles. The leatherback sea turtle is in critical danger of extinction, having experienced a loss of 80% of the total world population in the last 10 years. Populations on the main nesting beaches of the Pacific have declined in some cases by 90%. It is estimated that by the year 2025 the Pacific Ocean leatherback may disappear completely if no action is taken.

The Pacific green sea turtle (also known as the black turtle) is currently classified as endangered. Years of nest stealing and an excessive mortality rate of adults and juveniles caused by fisheries and pollution can be considered the main causes for these turtles’ decline.  For the last ten years research has been targeted at the long term monitoring of nesting females and their nests, to enable the formulation of management strategies that can be put into practice at this beach.

“This project could not exist without the support of the volunteers; they have a vital and active role in protecting the sea turtles. Ostional volunteers work alongside biologists, researchers and local residents during day and night patrolling, tagging and counting turtles, relocating nests into hatcheries, doing beach cleanups as well as supporting other activities to collect scientific data of these vulnerable animals. All this data helps us to understand the sea turtle populations fluctuations – and this data is decisive for designing effective conservation and management strategies to ensure the survival of these amazing animals on Earth.” – quote from Project Director.