Spain has an incredibly rich biodiversity and an abundance of a variety of species largely due to its size and geographical diversity.  The country boasts four of the nine biogeographical regions of the European Union (Atlantic, Alpine, Mediterranean and Macaronesian).  The country also has the second largest number of mammals in Europe, with 115 different species recorded; included among these are the Common Genet, Wild Boar, Barbary Sheep and Spanish Ibex, as well as cetaceans, otters and seals along the coasts.  The country is also home to some incredible native species, such as the Spanish ‘Big Five’: Bearded Vulture, Spanish Imperial Eagle, Iberian Lynx, Iberian Wolf and Eurasian Brown Bear.  Birds across the country also draw the awe of birdwatchers, with up to 635 different species colouring the sky including kits, vultures, eagles, flamingos and bustards.

There are many endemic species included amongst the above which demand responsibility from people.  Many organisations work to protect endangered species and ensure continued flourishing of the environment and all that call it home.  In fact, 35.7 % of the total Spanish land is forest area and 27% of the surface is protected.  Despite this there is a lack of knowledge regarding some habitats, thus, just 1% of habitats and 12% of species are studied enough to guarantee their conservation.  What is known, is that a number of species are endangered due to human activities.  Several of these are native Spanish species such as the Iberian Lynx, the most endangered cat in the world, with fewer than 100 adults remaining as of 2014. Other endangered species include Spengler’s Freshwater Mussel, El Hierro Giant Lizard (Canary Islands), Cantabrian Brown Bear, Spanish Imperial Eagle, Iberian Wolf and the Mediterranean Monk Seal.  The main threats to these and other species include overpopulation of coastal areas, pollution from human activity and fires, which can destroy considerable habitat each year.  Valuable and precious wetlands are also under threat from dredging, mining and intensive farming. 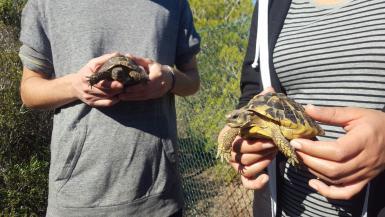 Our three programmes volunteering in Spain form an important part of conservation efforts, improving knowledge about the environment, learning new skills to combat dangerous practices and both researching and working hands-on in efforts in the area.  In Valencia, our volunteer project is located at the Albufera Natural Park, which is one of the most important wetland areas in the country with unique flora and fauna.  Activities can include dune and beach conservation, turtle monitoring, tree planting and forest fire prevention as well as data collection.  In Denia, a traditional fishing town just south of Valencia, the volunteering involves activities like coastal and underwater cleaning, coastal flora and fauna surveys and data collection and strengthening and regeneration of native flora in burned areas.  In Galicia, our Dolphin and Whale research volunteer project centres around data collection of the intelligent dolphin species.  It is crucial to continue working to ensure that some of the precious ecological systems of Spain remain in the public’s attention and protected from threats, including a lack of knowledge.